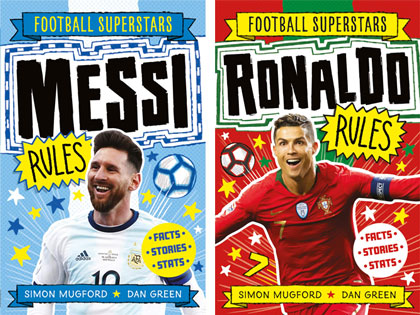 Filled with quizzes, stats and little known facts, plus illustrated and told with all the fun of a Tom Gates novel, the Football Superstars series is published by Welbeck.

Football Superstars: Messi Rules | RRP £5.99
Is Lionel Messi your ultimate football hero? Messi was the youngest player to score 50 goals in the Champions League, won the Ballon d'Or five times and once entertained the crowd by doing 1,200 keepy-uppies!

Discover how he went from being the smallest player on the field (as a young boy he was so tiny all the other players called him 'Titch') to being widely known as the 'Greatest of All Time'.

Football Superstars: Ronaldo Rules | £5.99
Is Cristiano Ronaldo your ultimate football hero? He has scored over 700 goals, won the Champions League five times and was the fastest player on the pitch in the 2018 FIFA World Cup.

Discover how he went from kicking bottles in the streets of Madeira to becoming a football superstar at Manchester United, Real Madrid and Juventus.

Which footballer has won the Champions League five times?