Beano has been on the hunt for Britain’s Funniest Class 2021 and the submissions have been undeniably top grade. 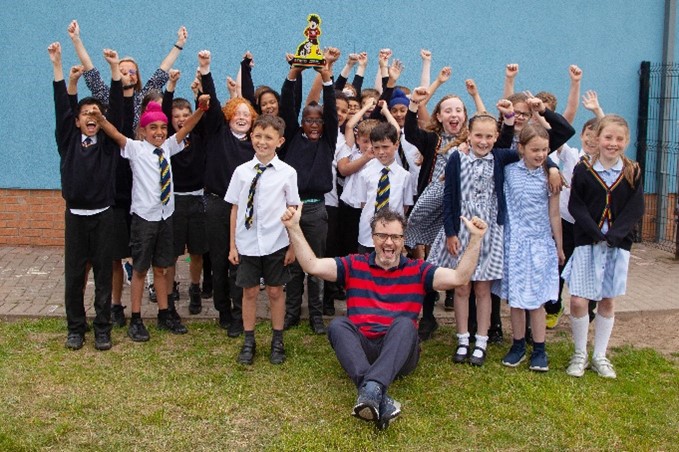 The annual competition, which is currently in its third year, challenges kids across the country to find their funny bones and submit their best quips in hope of securing the title as ‘Britain’s Funniest Class 2021’.

From ‘knock-knock’ to ‘what did?’ jokes there were heaps of hilarious submissions, but Forthill Primary School in Dundee took the top spot with this year’s winning joke “What did the facemask say to the mouth? Let me cover for you!”. The topical-inspired joke received over 21.7% of the final votes on Beano.com and Forthill Primary School’s Class 5B are revealed as Britain’s Funniest Class and immortalised as Beano characters in the comic on sale today.

A total of ten quick-witted school classes were shortlisted by a panel of Beano’s gag masters, before the public were given the deciding vote to crown the winner.

Runners up, Greystones Primary School weren’t far behind the winners with their very COMICal punchline securing 17.4% of votes - ‘What did the teacher say to the comic lover as a punishment? There will Beano comics for you’.

Rounding off the top three came St John the Baptist Primary with their rib-tickler, “Where's the best place to take a dog for a walk? Leeds” and 11% of the votes.

The top 10 jokes, all true Beano-esque funnies, are as follows:

Beano’s Mike Sterling presented the class at Forthill Primary School with the official Beano ‘Britain’s Funniest Class’ trophy alongside a bundle of Beano goodies including comic subscriptions for the whole class and books courtesy of Studio Press.

Mike Stirling, Editorial Director at Beano Studios said, “Beano is always there for kids seeking a joke to share with their friends and these new gags will continue to bring laughs to friends and families this summer. We've learned our greatest gags have always come from kids themselves and Britain's Funniest Class has schooled us yet again, raising some much-needed chuckles in classrooms. With the summer holidays coming Beano can't guarantee sun, but we 100% promise fun!”

The annual competition in partnership with YoungMinds, the children and young people’s mental health charity, aims to lift classroom spirits and tickle funny-bones whilst providing teachers with free educational resources linked to the curriculum.

All shortlisted schools will have their jokes added to Beano’s joke generator (www.beano.com/jokes) and receive special Beano certificates marking their achievement.

The comic featuring Britain’s Funniest Class and the shortlisted jokes is on sale now.